If you’ve toured my website, you’ve seen that I can be creative in all kinds of media, paint, video, fabric –  whatever I need to express my creativity, I use. I’ve been privileged to have the support of Timperspan Wood Products Inc. of Prince George in being able to complete a number of projects in the Douglas fir the mill specializes in.

This piece was created from a scrap piece of wood from the mill merged with a Dollarama purchase of “Believe” at the top. Took the word, added some lights and bling. 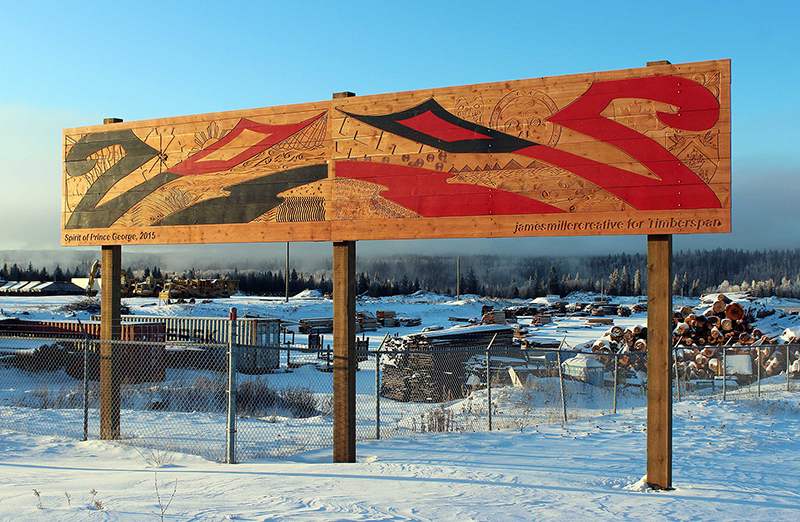 Commissioned my Timberspan; begun in May, 2014 and installed November 10, 2014, this work celebrates the city’s 100th anniversary year in the black and red color scheme used in native art to form an anagram of 2015. I carve using a small router, called a laminate trimmer, and have used it to create a series of abstract patterns along with references to Canada, its founding European nations and its indigenous peoples. Also referenced are the coat of arms of the country of origin of Timberspan owner Joe Cvenkel, Slovenia; his wife, Trinidad & Tobago; my wife, the Philippines and my logo, in a way my coat of arms, featuring a bee at the center.

This work, like much of my art, references what I maintain is the unity that forms the basis for the illusory diversity that we mistake for reality. I regard the Sri Ramana Marharshi quote carved on the work as the heart of this piece: To know the truth of one’s Self as the sole Reality and to merge and become one with it, is the only true Realization.

The work measures roughly 36′ x 7′ and can be seen at the entrance to Timberspan’s operations on Willow Cale Forest Road.

Here’s a gallery of some of my projects: