(Close-ups of each bib)

Like many, I was shocked by the death of 27 people at Sandy Hook Elementary School, December 14, 2012, when Adam Lanza (after killing his mother at their home) shot 20 young students and six teachers with his mother’s assault rifle, in an estimated five minutes, and then took his own life with a pistol.

While trying to know more about this, I stumbled across the Kid’s Stuff section of the National Rifle Association website and was surprised to see it sold baby bibs with NRA in block letters on them.

Here’s how the NRA sees it: This terry cloth baby bib proudly displays the building blocks of Second Amendment protection, “NRA”. This bib features an adjustable snap collar and is available with blue or pink trim. Please specify trim color when ordering.

Where my ideas come from, I’m not always sure, but it wasn’t long before I imagined 26 bibs (one for each person Adam killed at the school) embroidered with a letter of the alphabet and the name of a person killed, strung on a clothesline in a wooden frame. This soon changed into a quilt entitled “Death from A to Z by Adam Lanza, Dec. 14, 2012” and the quilt is now complete.

I believe there needs to be a sensible debate over gun control in the United States and that the NRA needs to be willing to participate in discussions to find ways to preserve the Second Amendment while limiting the amount of deadly force people can have in their possession in the form of a rifle or pistol.

What I am trying to do is reach people that have an entrenched position, in this case, those that oppose any kind of change to existing gun laws. Getting people to rethink their positions is sometimes done with words or images that shock by bringing extremes together.

In the case of this quilt, I have created a beautiful, warm object that symbolizes home, hearth and life. And, I’ve added another level to it by including NRA baby bibs, which are used to protect human beings when they are their most innocent, as children, and a title that includes the name of the killer, Adam Lanza.

Supporters of the NRA believe it is a force for good in life but any organization that is not willing to look at ways it can improve or adjust in a changing world can, through ignorance, work against its principles. I believe this is what has happened at the NRA. 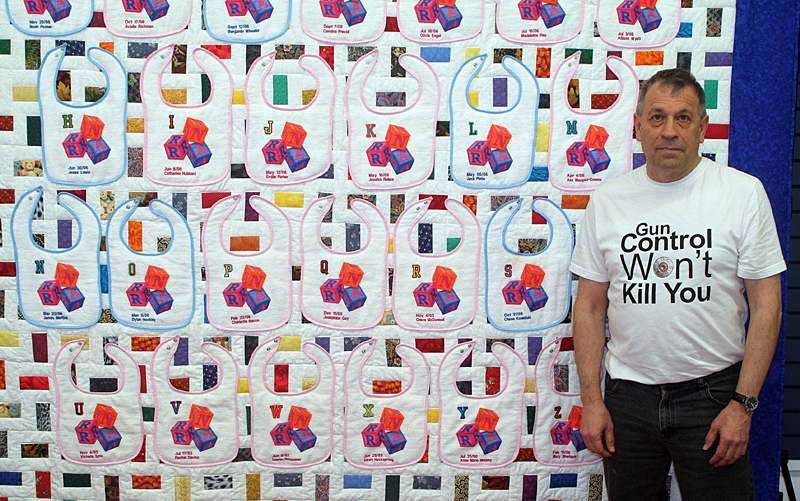