Please consider me in your search for a Marketing and Communications Coordinator. I think my communications experience and my creativity, expressed in a variety of media, make me a strong candidate. But it’s our shared vision that the key to a peaceful world is in unlocking the creativity and love of the mind that perceives it, that makes my candidacy ideal.

After completing my Art Education degree at the U of A, while also serving as a writer/production editor for the Students’ Union, Gateway, I joined The University of Calgary as a Communications Officer II. In that position, I worked with university administrators to develop and implement strategic communications plans for students, staff, faculty and the public. As co-editor of the bi-weekly, Gazette, I researched and wrote copy covering virtually all Faculties and often presented technical information to a more general audience. My article, New ways to slice the mapping pie, and its accompanying commissioned illustration is an example I also profiled new staff members, like Beatrice Medicine, and supplied photography, illustration and design skills.

Five years later, I accepted a position as a Journalism Instructor at Grant MacEwan, teaching newswriting, photography, graphic design and mass media. Moving to Vancouver, I served as Western Editor for Canadian Forest Industries Magazine, providing copy on all aspects of the business including harvesting, safety and milling.

Settling in Nanaimo, I freelanced as a weekly reporter for The Nanaimo Business Examiner, writing business-related articles and worked as a reporter for the Nanaimo Free Press. My Nanaimo experience also included operating my own direct-mail advertising franchise, where I helped small and medium sized businesses implement and analyze marketing campaigns. As Marketing Manager for forest equipment manufacturer T-MAR Industries in Campbell River, my duties included conducting customer surveys; producing advertising copy, brochures and videos; and launching the company’s newsletter, The T-MAR Times.

A downturn in the forest industry led to 10 years overseas teaching art and later, mathematics, in Libya, Mongolia, Saudi Arabia, Norway, the UAE and Japan. Highlights of this period include a number of two-dimensional works and video productions that include: a student-illustrated video of my children’s story, The Apple of Albert’s Eye, in Saudi Arabia; a  short film, God is Love, made with my Emirati students in Al Ain, UAE; a documentary, Truck Logging in Africa, in Cameroon; my video application for the position of Traveling Ambassador for Air Transat, in Dubai and the video introduction to a high school production of The Rocky Monster Show, in Jeddah.

I believe my communications and teaching experience would prove helpful in fostering community involvement and in engaging those you serve.

Returning to Canada in 2012, I relocated to Prince George, BC and launched my I launched my WordPress website to highlight my creative abilities in writing, photography, art, music and video production. I use my website, blog and twitter account to promote my work and ideas. I have a working knowledge of MS Office (including PowerPoint), Illustrator, Photoshop, WordPress and Movie Studio. As a practicing artist, I have completed a number of commissioned works and have submitted a number of proposals that have included a proposal for an installation to commemorate the Prince George Centennial (parts one and two) and serving as a team leader in a RFQ to build a holocaust memorial in Ottawa

In Prince George, I worked in a number of positions, including as a Community Support Worker and Residential Care Worker. Many of my clients were of First Nations ancestry and I provided them with informal counseling and support; medication administration and recreation and development activities. They, in turn, allowed me to learn about and appreciate their life experience. I’ve seen the “highs and lows” of not only Canada’s Indigenous peoples but its newer arrivals as well. Whatever the ethnicity, some live in splendor and some on the streets and many live with drug dependency issues, which prompted me, in part, to create my music video to my song, Brand New Song.

That’s me on the surface. Dig deeper and you will find someone who’s spent years practicing Transcendental Meditation and completed the advanced training to be a Sidha, which the TM organization claims is the basic unit of world peace. Although no longer an active practitioner, I still admire many of the concepts taught. One that applies to conflict is the idea that, “Problems can’t be solved on the level of the problem.” I believe the ignorance and fear that lies at the heart of racism is not alleviated by fighting the darkness, but rather by introducing a new element: the light of love that will foster the knowledge of our unity.

In my continued search, I have studied the teachings of Eckhardt Tolle, Gangaji, Sri Ramana Maharshi, Jesus and many others. I have been particularly struck by the spiritual masterwork, A Course in Miracles, and two supporting volumes, Journey Beyond Words and The Other Voice. If you choose to hire me for this position, the framework and philosophy I propose has peace, unity and forgiveness as its basis.

Only love can end the fear generated in the mistaken belief in our separation, by changing the hearts and minds that see the world as a threatening place and not through implementing changes to the external world. Why? Because the outer world we see is a reflection of the inner world in our minds. (For a greater understanding of my position, see my application for the position of Anti-Racist Specialist with Norquest College (which I suggested renaming Inclusion Coordinator) and my article on the need to understand and not attack perceived enemies in my critique of “Assholes – A Theory” the book by philosophy professor Aaron James.)

I note your organization was founded by two artists and visionary thinkers, Sandra Bromley and Wallis Kendall, who in creating The Gun Sculpture asked, “Can we imagine a world without the threat of violence?” I can, which is why I’ve created my Happy Face Series and works like Teach Only Love, The Spirit of Prince George, 2015 and my quilt, Death from A to Z by Adam Lanza, Dec. 14, 2012, as a starting point for discussions around the supposed “safety” found in gun ownership, as supported by the NRA in the US. 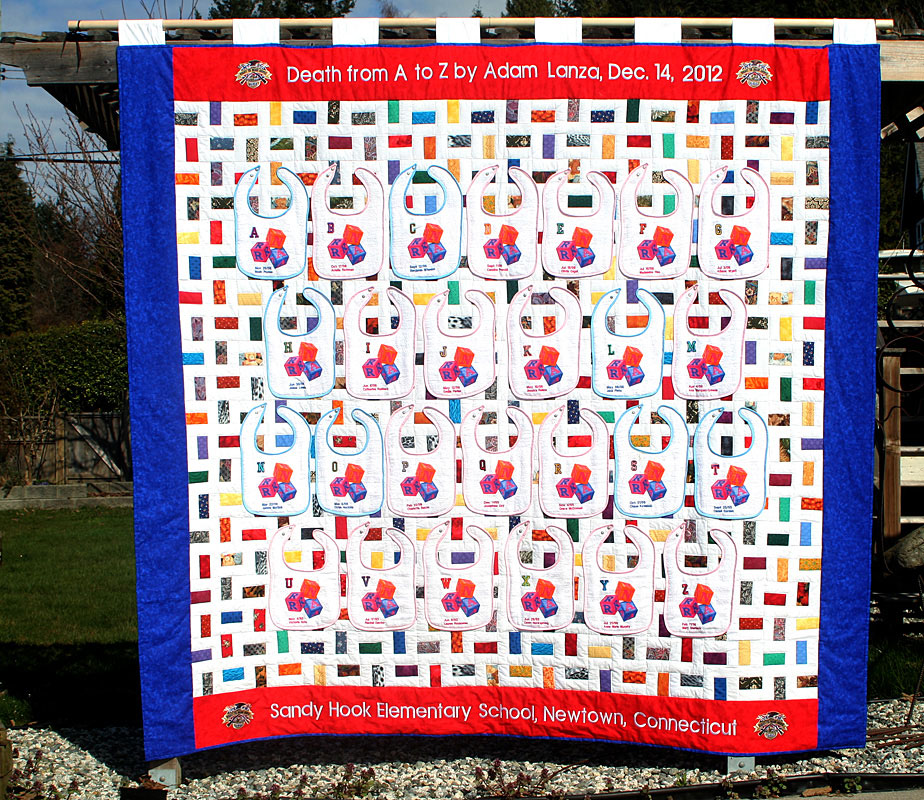 The possibility of being able to forward a message that is completely positive in its approach is as exciting as it is, sadly, unusual but I have always thought “outside the circle”, and believe, as I stated earlier, that I am an ideal candidate for this position. Accordingly, let me suggest we meet to discuss the contribution I could make to iHuman in filling the role of Marketing and Communications Coordinator.